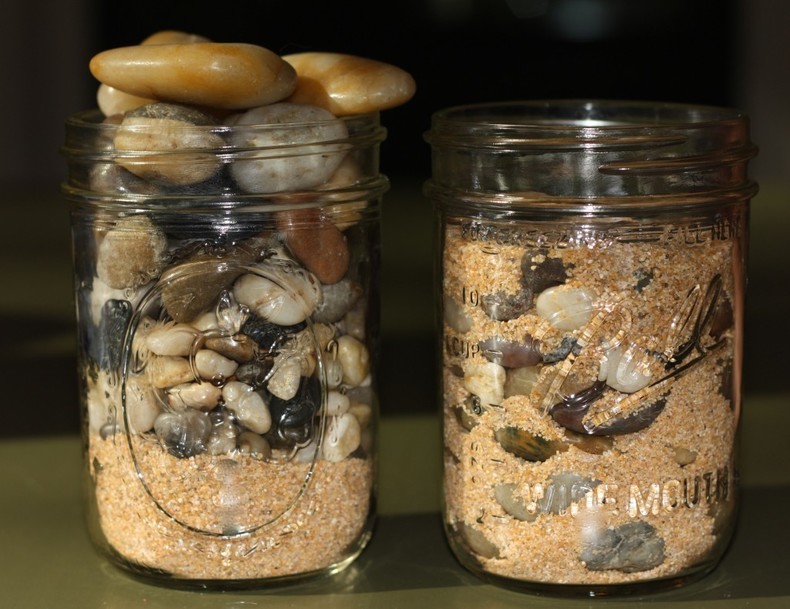 There's a famous story from Stephen Covey's book, First Things First 1 that goes something like this:

A professor is giving a lecture to a class and holds up an empty bucket. He shows the bucket to the class and asks if it is full. The students, thinking this is some silly exercise, all chime in unison, "No."

He then gets out a bunch of large fist-sized rocks and drops them into the bucket one by one, until no more will fit inside the bucket. He asks, "Is the bucket full now?" "Yes" - chime the students.

The professor smiles; he pulls out a large jar of sand from underneath his desk and proceeds to pour it into the bucket. The tiny particles of sand fill the spaces in between the large rocks. The professor shakes around the bucket until the sand settles, and continues to pour the sand in until the sand is level with the top of the bucket. He asks again, "Is it full now?". Sensing that there is more to this, the students are silent. One student reluctantly says "Yes, the bucket is definitely full now."

The professor says nothing; this time he pulls out a jar of water from underneath his desk and slowly pours some of the water in to the bucket. At first the water pools up on the top, but it slowly seeps into the sand, filling in the tiny air pockets between the individual particles. He continue to pour water until finally a thin layer of water remains on top of the sand at the very top of the bucket. The students say nothing.

"What was the point of this exercise?" the professor asks.
"The bucket is never full!"
"You can always cram in more!"
"Don't be overconfident!"

"No, the point is that if you don't start with the large rocks, you'll never get them in."

The bucket is of course an analogy for life. And the large rocks are large goals or priorities. What Stephen Covey is saying is that you've got to prioritize the big stuff first or it will get drowned in all of the small, day to day things represented by sand and water.

But I think he only gets this analogy half right. I think the analogy is more like this...

We all start with an empty bucket in life, but from the moment we are born, like an hourglass, there is always sand trickling into the bucket. And unless you have a system for actively dealing with that sand, you'll soon get overwhelmed.

Assuming you live in a developed country, there are inescapable responsibilities that come up - things like paying bills, car maintenance, getting a medical and dental checkup each year, checking your insurance coverage every so often, etc. You don't necessarily have to do all of these things, but you will almost certainly regret not doing them after some time. Car maintenance is 'sand' up until the point when your car breaks down. Then it's a huge fist-sized rock. That dental checkup? What should have been a routine cleaning, became a cavity. The point is if you don't pre-emptively deal with the logistical crap that constantly trickles into your bucket, in most cases it will only consume more time and effort later.

So the way I think about it, it's best to have a system that constantly tosses the sand out of your bucket. Ideally, you've given some thought to what all of these logistical things you have to deal with are (as opposed to the truly insignificant things) and you've automated as much of this as you can. If you can do this, then you really free up your time and energy to focus on the large rocks.

That's my goal at least.

1 I'm paraphrasing this story. The book is terrible by the way, don't buy it.